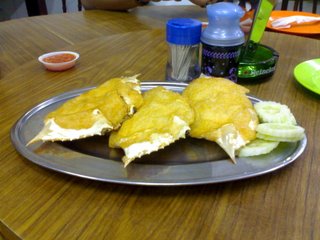 If you are looking for a good food while you are in Kemaman or are stopping while on the way to any other places in Terengganu, you should go to a restaurant called Restoran Tong Juan and try its specialty, Stuffed Crab.

Stuffed Crab is made of chunks of crab meat, onions and parsley which are packed into large crab shell and is fried. It is served with chilly sauce. Don't worry as this sauce is not really hot but a little bit sour.

The direction to this restaurant is quite easy. If you are from Kuantan or from East Coast Highway, once you reach a traffic light downtown Chukai, turn to the right. About a kilometer, you will find the restaurant on your right hand side, facing Kemaman River which is on your left hand side. This restaurant is open for lunch and dinner. 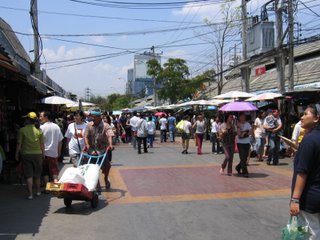 This place is a must if you visit Bangkok. Probably the biggest market in this region, you can find almost everything at Chatuhchak Market, from clothes, handicraft to pets. I bet if you are a true shopper, one day is not enough to get around the whole market. Furthermore, prices are considerably cheap.

This market is open during weekend only (Saturday and Sunday) but by Friday afternoon, the stalls are already open. Transportation to this place is not a big problem at all as BTS Skytrain service ends here. Besides, you can also take taxi or take the most efficient Tuk-tuk if you stay near to Chatuchak Market.

Tag: Chatuchak, market, Bangkok, shopping, Skytrain
Posted by stROZze at 10:16 AM No comments:

Malaysia celebrated its 49th nationhood last Wednesday, 31st August. It happened that I was in KL on that day, after finishing a training and thus, I planned to watch a concert which was held at Kuala Lumpur City Centre (KLCC) on the eve of Merdeka day and later to join countdown to midnight as well as to enjoy fireworks show.

While I was inside a lift in a hotel I stayed, namely Traders Hotel, a hotel staff asked me where I would be going on that night to celebrate Merdeka. I replied that I would be going down to watch the concert and later to witness a beautiful fireworks show. He smiled and instead recommended me to go to 33rd Floor of the hotel to see the fireworks. There I should have a clearer view. Wow, that’s a good idea! Furthermore, I could hardly walk at downstairs as the area was jam-packed with thousands of spectators.

Then, I just stayed inside my room while waiting for the midnight to come. I watched TV and read newspapers. My friend who came over surfed complimentary Internet access provided by the hotel.

About five minutes before the midnight, we went over to 33rd Floor, where a swimming pool was located. Upon arriving, I saw a lot of other hotel guests had assembled here and they had booked strategic location to witness the show. We, however, managed to find an unoccupied space. It headed towards majestic, the world’s tallest twin tower, PETRONAS Twin Tower. Besides the KL iconic building, we also saw other towers which did not miss to celebrate this festival, also in conjunction with a special promotion by the national power company, TNB, by lighting up their colourful neon.

About one minute to go to the midnight, we heard huge roars from the ground as thousands of people were counting to the special moment. However, this had continued pass the midnight and no fireworks had been launched. What happened? Any technical glitches? Only few kilometers away, at Bukit Bintang, I heard few fireworks had been shot to the sky. Some hotel guests moved to the other side of the floor to see the fireworks but we just stayed here so that others wouldn’t take our place.

It had passed five minutes. Huge roars were still heard from the ground as people were anxious for the moment. Suddenly a loud sound was coming up from the ground to the floor we stayed. Yes, the show had started! The sound was so loud as the fireworks rose to the sky.

Very beautiful and cool! The fireworks exploded right in front of our eyes! I could hardly open my eyes as the explosion was very near to us. The fireworks were launched from the ground and they exploded at a level which was equal to the floor we stood up. Nevertheless, it was such an experience! Colourful and various firework shapes changed in seconds.

I also managed to capture few shots but forgive me as the pictures are quite blurry as I couldn’t stand the explosion of the fireworks right before my eyes. Also featured is a video captured during that precious moment. Cheers!