Petronas Twin Towers is undoubtedly Kuala Lumpur's most popular landmark. The 88-storey twin buildings was once the tallest building in the world. Although there are few more buildings which have now surpassed Petronas Twin Tower as the world's tallest building, such as in Taiwan and China, which the latter is being built, it is still regarded as the tallest twin tower in the world!

Located at the heart of Kuala Lumpur city, called Kuala Lumpur City Centre (KLCC), it is accessible by public transportation such as bus, taxi and underground train. There is also one big shopping complex there called Suria KLCC, which you can find almost everything including international brands as well as unique local brands.

For those who like seeing KL from high above, you may go up to Skybridge which connects both twin towers at levels 41-42. The admission is free but you have to queue and no reservation is allowed. The Skybridge is open from 9.00AM to 7.00PM daily except on Monday. So, be sure you come early and ticket is issued as early as 8.30AM. 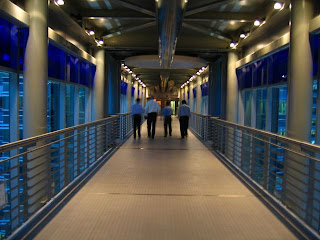 View in the Skybridge. 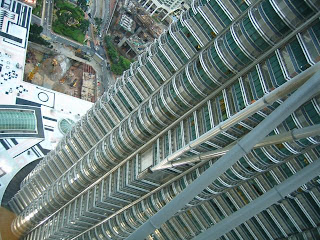 View down under Skybridge. 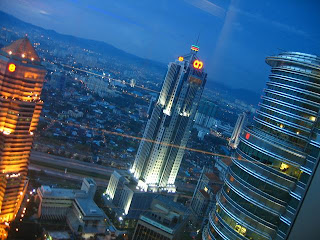 Stormwater Management and Road Tunnel or SMART Tunnel has finally been opened to public starting today. This is a new architectural landmark in Kuala Lumpur and has featured in Discovery Channel. The tunnel has dual purpose which is to mitigate flood and also to serve as two-storey highway.

In the morning, I thought of getting the first time experience driving into the newly-built tunnel but couldn't make it as I was late. However, after a long working hours, I managed to drive there. From the North, the tunnel can be accessed via Jalan Tun Razak near to Menara RHB/Kg. Pandan round about or from Jalan Sultan Ismail (Bukit Bintang). The tunnel ends at KL-Seremban Highway near to TUDM Sungai Besi.

It was an enjoyable driving experience since everybody was not rushing while seeing the internal view of the spectacular tunnel. The ride was smooth but the tunnel is not straight as it has to cut through underground pilings of KL buildings. For the first month, motorist can enjoy free access but the toll charge for the subsequent months has not been finalised yet. Think everybody expects this will be the highest ever toll rate in KL since the costs associated with this mega project were huge.

When reaching the end of the tunnel, there were toll booths. Due to testing period, drivers with Touch&Go card and SmartTAG still had to use them. However, the value inside was not deducted as the access was still free.

I made U-turn at Cheras/Taman Desa flyover and drove back into the tunnel to the North. In the tunnel, local radio frequencies are displayed for drivers to tune in to get the latest updates on the tunnel condition. As the tunnel has dual purpose which one of them is to mitigate flood, during heavy rain, the highway will be closed and will be flooded with rainwater. In emergency cases, there are staircase to climb up to the ground level. Hopefully there will be no cases whereby drivers have to leave their cars when the water floods in. Think every driver now has to consider buying catastrophe insurance for every car.

Before reaching the other end of the tunnel, the highway splited into two directions. Once headed to Jalan Tun Razak while the other one to Jalan Sultan Ismail. I took the latter one. The tunnel is linked to Jalan Imbi/Jalan Pudu and Jalan Sultan Ismail junction, near to Berjaya Times Square. For shopping craze, it is now easier to go shopping at Bukit Bintang. 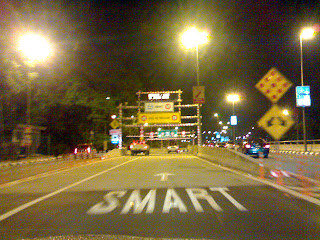 The tunnel entrance from the North via Jalan Tun Razak. 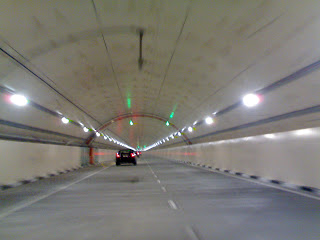 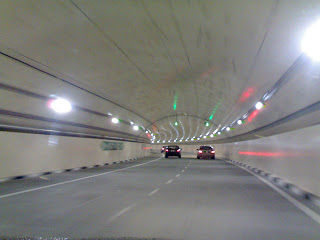 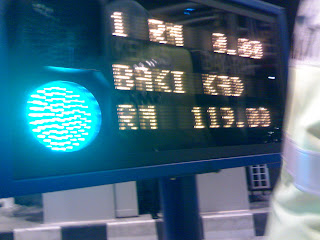 No toll charge yet. Johor Bahru is the southernmost city in Peninsular Malaysia and located at the border of Malaysia-Singapore, which is connected to Singapore via a causeway across Tebrau Strait.

Johor Bahru is well-known as a shopping hub especially to Singaporean who enjoy cheaper currency rate here. A lot of shopping complexes as well as hypermarkets can be found everywhere in Johor Bahru.

Johor Bahru is also popular with its food. If you fancy seafood, you may go to Lido Beach or Permas Jaya. You can also find Mi Rebus at Stulang. If you like dining on a tree while enjoying local cultural show, you may try Nasi Beriani Gam at Anjung Warisan, which is located near to Hutan Bandar.

A lot of new development projects are underway in Johor Bahru. To ease the congestion at the immigration check point, which is regarded as the world's most busiest immigration check point, a project called Southern Integrated Gateway (Malay: Gerbang Selatan Bersepadu) is being completed. It includes main railway station, a new customs, immigration and quarantine complex (CIQ) and JB Sentral, a new transport hub.

Under Malaysia 9th Plan, Johor Bahru is also included under the Iskandar Development Region (IDR). The objective of this project is to develop the area to be the Southern Peninsular Malaysia's most developed region, where living, entertainment, environment and business seamlessly converge within a bustling and vibrant metropolis.